Photographs of Katy Perry and Snoop Dogg were shown to a Court in defence of a man charged with possessing a knuckle duster when police seized his 9 carat gold two-finger ring valued at approximately $10,000 to $15,000.

The solid 9 carat gold item measured 70mm long and 40mm wide with openings for two fingers and the letters “F”, “I”, “N” and “K” embossed on top covering almost the entire face. 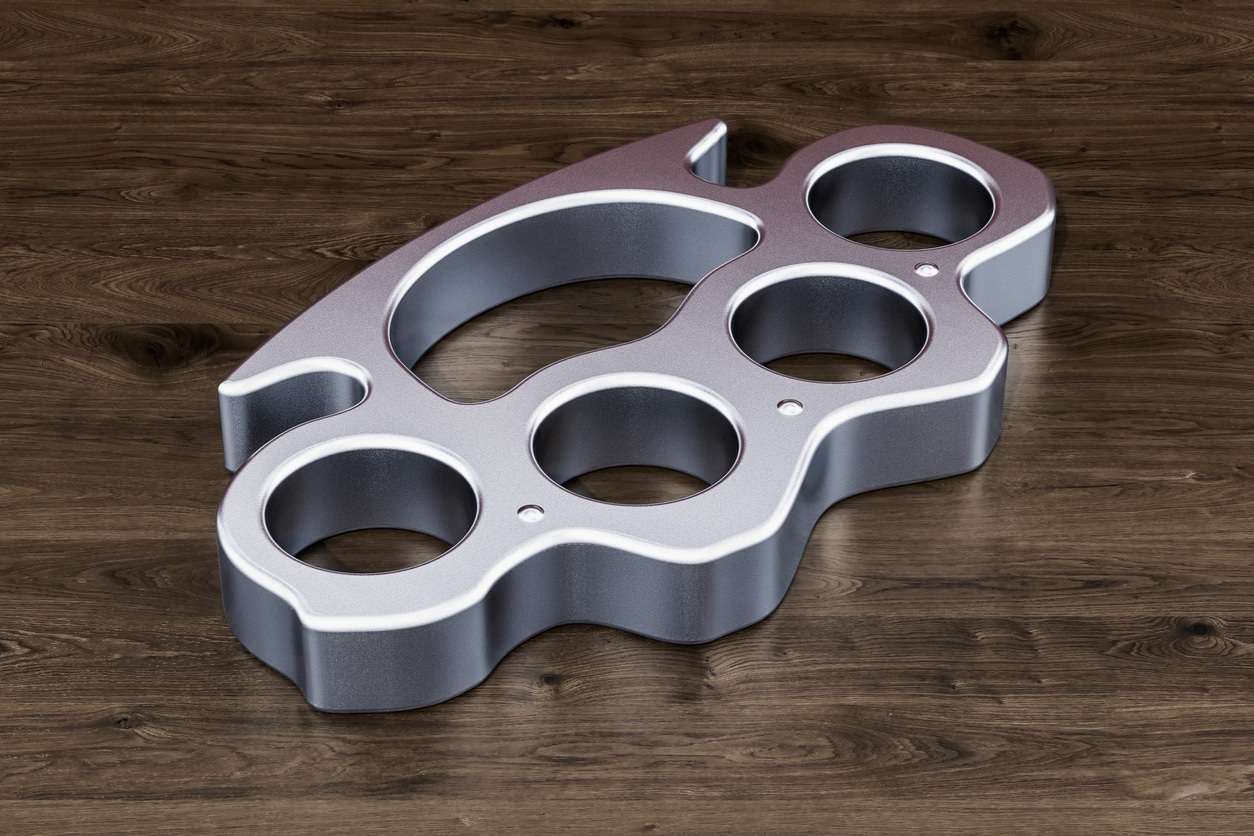 The police officer who seized the item concluded that it was a knuckle duster on the basis that he considered it had been designed to protect the knuckles in the event that the wearer lands a blow on somebody and that it was designed to increase the impact. The officer described it as, “a very, very large piece of metal which, if it was used to punch somebody, would inflict quite a large deal of harm.”

In his defence, the man charged presented evidence from a jewellery buyer with Shiels Jewellers and Grahams Jewellers who said that two and three fingered rings were a fashion out of Hollywood, and also presented the photographs of performers sporting similar jewellery.

Under the Summary Offence Act it is an offence to have possession of a ‘prohibited weapon’ with a maximum penalty of $10,000 or two years imprisonment. At the time, the Summary Offences (Dangerous Articles and Prohibited Weapons) Regulations contained a list of prohibited weapons along with their definition including such things as tear gas, expandable batons, nunchakus and knuckle dusters. Knuckle dusters are defined as:

(a) increase the force of impact of a punch or blow when striking another with that hand; and

(b) protect the knuckles from injury,

but does not include a boxing glove.

The Court accepted that the item was ‘designed to be worn across the knuckles’, and further that if used to strike someone it would increase the ‘force or impact’ of the blow. However, conventional knuckle dusters have an attachment that allows the object to come into contact with and nestle into the palm of the hand so that the return force of a punch or blow doesn’t injure the knuckles. In contrast, this item would not protect the knuckle from injury – or at least the prosecution had not presented any evidence that it would do so. On that basis, the item didn’t meet the full definition of a knuckle duster and the man was found not guilty of the charge.

An interesting aspect to this case was the fact that the Supreme Court held it was not necessary to prove the ‘subjective’ purpose of the designer or adaptor of an object. On that basis, if an item falls within the definition of a particular prohibited weapon police do not have to prove that it was designed or adapted for that purpose.*

It can be seen from this case that the law regulating weapons in South Australia, while clearly intended for the public good, are such that individuals at times can inadvertently find themselves in a situation that leads to a criminal charge. The law refers to ‘offensive weapons’, ‘dangerous articles’ and ‘prohibited weapons’ and each term has a different meaning. The penalties are high, and any person charged with a weapons offence should obtain immediate legal advice from a specialist Criminal Lawyer. Websters Lawyers offer a free first interview with an expert Criminal Lawyer in Adelaide or the North-East who can assist in advising on these types of charges.

* Many of the definitions of prohibited weapons that applied at the time this man was charged included the phrase ‘designed or adapted’ however since then the definitions have been changed to remove the words, ‘or adapted’.