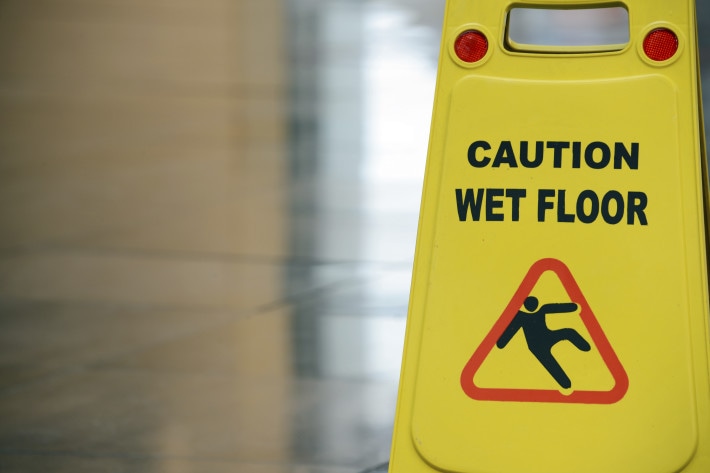 A woman has been awarded $660,000 in compensation after she slipped and fell on a wet floor in a Sydney fruit shop, sustaining severe injuries.

The woman, aged 36, had been in the fruit shop when she slipped on the wet floor and landed heavily on her side. She suffered soft tissue injury to her neck, right shoulder, arm and upper and lower back. After the accident, she experienced restriction of movement, discomfort, headaches, depression and anxiety.

She also suffered a wedge fracture in her spine which worsened her condition, causing ongoing pain and post traumatic stress disorder (PTSD).

She took legal action against the shop, claiming damages for personal injury.

On the day of the trial, the fruit shop owners failed to appear. Because of this, the judge entered judgment in favour of the woman (this is known as a default judgment), being satisfied that the injury occurred because of the shop owner’s negligence. This meant that the woman won her case without a trial having to take place. It was then up to the woman to convince the court that she was entitled to the damages that she was claiming.

Although NSW law applied in this case, there are similar principles in South Australian law. When applying the facts to work out whether a party was negligent, the court can also work out how much to award an injured person in damages.

A court will consider many things, including:

The Court looked at the woman’s background and made many findings, including:

When considering compensation, the court decided that the most impact would be felt in the woman’s future earning ability (future economic loss) and so awarded her $305,000. This took into account her lost income as a shelf stacker and that she would never be able to work as a hairdresser due to her injuries.

The next most significant award was for non-economic loss. This is compensation for injuries. The court awarded her $136,000 because she couldn’t do the full range of domestic jobs that had previously been her responsibility and because she would need ongoing treatment.

It also made awards for past economic loss, future superannuation earnings, future treatment costs as well as other costs.

Although the case deals with NSW law, it shows how important it is to see a lawyer as soon as possible if you have suffered an injury in a shop or public place.

A good public liability lawyer will be able to guide you through the process, provide advice and assist you to collect all the evidence you need to prove your claim. This can make a huge difference to any damages that you may be awarded.

Websters Lawyers have a team of public liability lawyers who have excellent experience in these matters and an outstanding track record in getting the best results for their clients.

If you have been injured in a public liability accident, contact us today for a free first interview. Because the sooner you act, the better your chance of a great outcome.