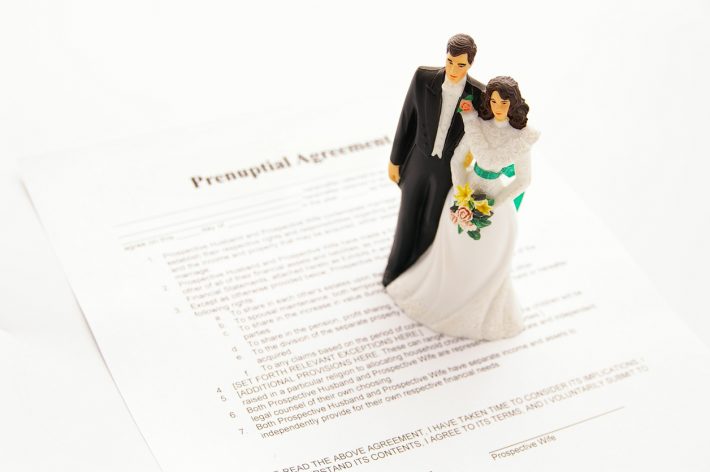 When a 67-year-old multimillionaire wanted to marry the 36 year-old foreign woman he’d met online, it wasn’t surprising that a pre-nuptial agreement was prepared.  Her lawyer told her that the agreement was “no good” but she signed it anyway. After they separated, the woman challenged the agreement, claiming that she had signed it under duress. Now the High Court of Australia has decided this case, which is the most significant decision to date on the operation of pre-nuptial agreements in Australia.

Before we look at the case, it’s useful to understand how a pre-nuptial agreement works.

Pre-nuptial agreements are a form of binding financial agreements (BFAs). BFAs are agreements that a couple can make either before cohabitation, during cohabitation or after separation. They deal with how the assets owned by the couple (either in their sole names or jointly) are divided in the event that the relationship ends.

By making a BFA, a couple agrees to deal with their assets in accordance with the agreement. They expressly wish to prevent the Family Court from determining the division of assets at the end of the relationship.

Under some circumstances, BFAs can be disputed.  General principles of contract law apply to BFAs, including:

These are all safeguards to protect both parties. In this case, though, there was a real question of whether the wife had been under duress when signing the agreements. If there was duress, they couldn’t be binding and she could take legal action to claim a larger slice of the husband’s assets.

The wife met the husband on an online dating website in 2006. She was living in another country at the time and was aged 36. The husband was 67 years old. She spoke little English and had no children and no assets.

After they had met and spent a few months travelling together, the husband arranged a visa for the wife to come and live with him in Australia. They decided to marry before the visa expired. In August 2007, they arrived in Australia and lived together in the husband’s penthouse.

As the husband wanted the wife to sign a pre-nuptial agreement, she sought independent legal advice. Her lawyer advised her not to sign because the agreement was “no good”. The wife understood that if she didn’t sign the agreement, there would be no wedding. She signed the agreement and a few days later they were married.

In June 2011, the husband and wife separated and in 2012, the wife applied to the Federal Circuit Court to declare that the agreements weren’t binding, that they should be set aside or were void.

The Husband died in 2014 and so the executors of his estate defended the legal action.

During the trial, the Court found that even though the wife was unaware of how much wealth the husband had (it was in the order of $18 million), she was aware that he was wealthy, that he believed that his money was his and that he wanted it to go to his children.

The Court found that the wife knew enough English to understand what was in the agreement and to understand her lawyer’s advice that she shouldn’t sign it.

It decided that the wife had signed both agreements under duress:

[The wife’s] powerlessness arises not only from her lack of financial equality, but also from her lack of permanent status in Australia at the time, her reliance on [the husband] for all things, her emotional connectedness to their relationship and the prospect of motherhood, her emotional preparation for marriage, and the publicness of her upcoming marriage.

It set aside the agreements.

The husband’s executors appealed this decision. On appeal, the Full Family Court found that when deciding whether the wife was under duress, there must have been “illegitimate or unlawful” pressure on her to sign the agreements. It wasn’t enough that there was an inequality of bargaining power and so the Court found that there was no duress. In support of this, it said that the wife was always aware that the husband wanted his wealth to be his and that he wanted it pass it on to his children.

The wife then asked the Court to uphold the judgement of the trial judge, even though it had found that there was no duress

The Court refused. It said that even though the wife was in a position of disadvantage, the question was whether the husband had taken unconscionable advantage of her. It found that he hadn’t because there was no threatened or actual unlawful conduct.

Even more significantly, the Court said there was no duress because the wife had independent legal advice. She was told not to sign the documents but went ahead and did it anyway.

The Court found that the agreements were binding.

The woman appealed the decision to the High Court of Australia

It said that all of these factors increased the pressure on the wife to sign the agreements and made it more difficult for her to exercise her own free will. The agreements showed a “gross inequality” between the parties. The High Court set aside the agreements, which have cleared the way for the wife to pursue her property and maintenance claims against the husband’s estate.

The case will now return to the Federal Circuit Court to decide whether the wife’s claim for a $1.1 million property adjustment as well as $104,000 in spousal maintenance should succeed.

The High Court’s decision makes it clear that entering into a pre-nuptial agreement is a highly sensitive matter and should not be taken lightly. Both parties should get independent legal advice. Plenty of time should be taken to consider all of the implications and both parties should have the support of close family and/or friends. Because, as we see from this case, a pre-nuptial agreement may be very difficult and expensive to invalidate at a later date.

Websters Lawyers has a family law team that is experienced in all aspects of BFAs, especially pre-nuptial agreements. We can assist you, whatever your query or concern. Contact us today for a free first interview.