A woman was charged with an aggravated driving offence and received a 3 month prison sentence. Why? Because she mistook her car accelerator for the brake, causing her to plough through a shop window and injure pedestrians. The woman was in all other respects a model citizen. She appealed her sentence, saying that it was too harsh; she had simply made a mistake and lost control. This case raised the question of whether an aggravated driving offence should always result in a prison term or whether there are circumstances in which imprisonment can be avoided. 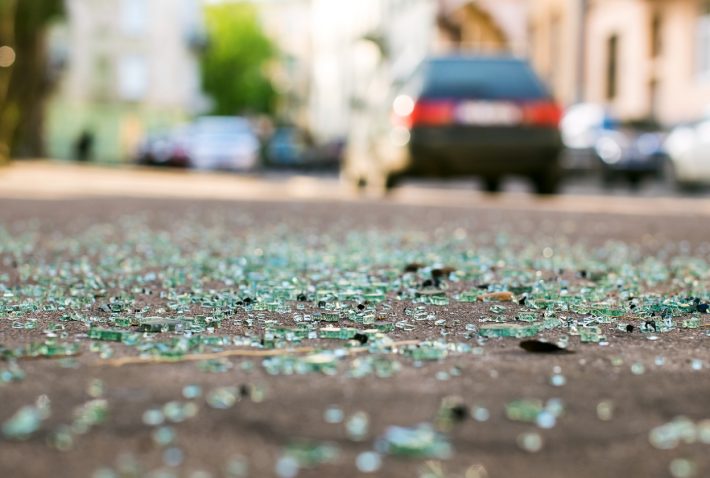 The woman was driving her husband’s car through the Glynburn Plaza Shopping Centre in the Adelaide suburb of Firle. She slowed down in the carpark to look for a parking space.

Suddenly, her car accelerated towards a shop. It drove over a bollard, mounted the curb, struck a nearby car, cracked the shop window and hit two pedestrians, one of whom was dragged by the car. Both pedestrians were significantly injured. The car finally stopped after hitting a garden hedge in the carpark, probably (in the Court’s estimation) because the driver was able to apply the brakes. It was estimated that the entire incident lasted eight or nine seconds.

She was charged with aggravated driving without due care.

Driving without due care

Driving without due care is commonly known as careless driving. In short, the law says that it’s an offence to drive without due care or attention, or without reasonable consideration for others. Penalties include a fine of up to $2,500 and three demerit points.

When the offence is aggravated, it means that it is serious and more severe penalties will apply. A person can be charged with aggravated driving without due care in circumstances that

The maximum penalty is 12 months imprisonment and licence disqualification for at least 6 months.

In this case the charge was an aggravated driving offence because of the injuries to the two pedestrians.

The case first went to the Magistrates Court and the woman pleaded guilty at the first available opportunity. She was able to show evidence that she had no prior convictions and an excellent driving history. She was of good character and not under the influence of alcohol or drugs at the time of the accident. Although she was unable to give a reason for the accident, she did admit that she may have mistaken the accelerator for the brakes.

The Magistrate decided that the woman had plenty of opportunity to stop the car before causing more harm to the pedestrians. Although the Magistrate acknowledged that she was “deeply remorseful,” it was “a serious case of driving without due care [sitting] at the higher end of the offence.”

The woman was sentenced to a prison term of 3 months (reduced from 5 months due to her early guilty plea). The term was suspended, provided that she entered into a 12 month good behaviour bond.  Her licence was also disqualified for 12 months.

The woman appealed her sentence to the South Australian Supreme Court, submitting that the penalty imposed by the Magistrate was too severe.

The Supreme Court found that the woman had probably mixed up the pedals of the car and that her mistake was only very brief. She had not deliberately caused the damage or injuries to the pedestrians and had not been indifferent to an obvious danger.

The Court considered another case in which a truck driver was imprisoned after he hit and killed a cyclist whilst travelling at high speed into direct sunlight. In that previous case, the truck driver had prior convictions for driving offences and had also deliberately driven at speed even though he couldn’t properly see.

The Court found that in contrast, the driver in this case had no criminal history, had not intended to cause the damage or injuries and her lapse of judgement lasted for only a few seconds. Neither victim was killed even though their injuries were significant. It said that the woman didn’t in fact have control of the car so could not have done anything to avoid the accident in those few seconds.

The Court said that a prison sentence was inappropriate because:

The Court decided that the more appropriate penalty was a $1000 fine and 12 month licence disqualification.

Even if you are charged with an aggravated offence, pleading guilty doesn’t necessarily mean that you’ll be imprisoned. The Court in this case carefully considered whether the sentence was appropriate and reasonable in light of all the circumstances. Imprisonment is a penalty of last resort and the circumstances of the offending, combined with the woman’s background, demonstrated that her actions were not so bad that they justified such a penalty.

Even though the Magistrate had suspended the sentence, this would have a lifelong impact on the woman, especially if applying for employment or travelling internationally.

The Court decided that that the licence disqualification (and the fine) would be a significant enough punishment. It would certainly severely disrupt her ability to go about her normal life.

This case also demonstrates the importance of mitigation. The woman’s lawyer gave the court information about her circumstances and history as a way of attempting to reduce the harshness of the sentence. Those arguments were well received by the Court, which decided that mitigation was appropriate because the woman clearly wasn’t one of society’s worst offenders.

This is a great example of how legal representation can make a huge difference to the outcome of a case.

If you’ve been charged with a criminal offence, you need to put your best foot forward to present your strongest case. That’s where Websters Lawyers can really help. With a team of outstanding criminal and traffic lawyers, we can assist you. Contact us today for a free first interview.